It's been a long time since I did any updates to this site. I've been working on a new book so its taken a lot away from posting. To tell you the truth I've grown tired of posting here. It seems that everything I post you can find on another site. News and reviews of every one's point of view and well I'm not sure my point of view is important. Don't get me wrong I still love and enjoy Doctor Who, but for the time being - at least until I finish my current book and a couple more - I won't be posting here. I hope you are all enjoying the current series of Matt Smith I know I am, and I hope to be back one day to continue this site. Until then, you can follow me at my writing site www.charlesmillhouse.com where I may even sound about Doctor Who there.
Cheers
Posted by Charles F Millhouse at 7:00 AM No comments:

Bringing us up to speed, here is some Doctor Who news.

David Tennant and Catherine Tate are to appear in a production of William Shakespeare's Much Ado About Nothing, which opens in London's Wyndham Theatre from 16th May 2011. They will be playing the roles of combative lovers Beatrice and Benedick in the play, being directed by Bush Theatre Artistic Director Josie Rourke.

Casting for the new series of Doctor Who continues:

Leon Vickers is a new actor, having just graduated from the Royal Scottish Academy of Music and Drama. His television credits include Garrow's Law and Being Victor he is believed to be playing a character named 'Clone Worker' in Doctor Who.

Mark Bonnar whose credits include the series Paradox and recurring roles in Casualty and The Bill. His role in Doctor Who is currently unknown. [Bonnar's entry at Hatton McEwan]

Posted by Charles F Millhouse at 8:18 AM No comments:

Sorry I've been away. Haven't much time to play with this site. But I'm back and hope everyone had a good Holiday season.
Posted by Charles F Millhouse at 8:16 AM No comments:

SFX is reporting on the first half of the 2011 series. Here is the skinny:

In this section we’ll mention stuff that seems to be based on some substantiated facts, rather than just the tabloids making up rubbish

Episode One (part one of a two-parter):

Other info: Apparently the episode has a cheesy title (for the moment, anyway) according to this Tweet from Moffat: “Told my son the title of ep 1 of the next run of Dr Who. A pause. ‘I think we can do better, Daddy.’ Then: ‘We need clever. Not cheesy.’”

This story will be set and filmed partly in Utah.

Mark Sheppard (Battlestar Galactica, Medium, Supernatural, Warehouse 13, and a zillion other genre shows) will be guest starring in the opening episodes as revealed in a press release from the ValleyCon 36 convention: “We had just booked Mark’s airline tickets a week ago when less than 12 hours later he got the dream job of any kid who grew up in England-and many kids here too. He landed a huge role in the new Doctor Who but they needed him there the next day. There was no way we were going to stand in the way of that and so Mark took the job but with his deepest apologies. We will try to work out an appearance with him in the future and wish him great luck with Doctor Who!”

Sheppard is to play a character called Canton Everett Delaware III (according to Pop Culture Zoo). The Doctor Who News Page has images of Sheppard and Alex Kingston (River Song) filming in Cardiff Bay on 18 October (clearly not all the US scenes are actually being filmed in the US)

Gaiman on the TARDIS set, a pic he posted on his Twitter feed

Written by: Neil Gaiman
Directed by: Richard Clark
Other info: Rory is definitely in this episode (confirmed on Twitter by Neil himself)

In a column for Doctor Who Magazine, Gaiman described Suranne’s character as “someone who is beautiful, and who bites, and who might just turn out to be an old acquaintance with a new face…”, adding, “it starts in void-space, with something – or someone – we have not seen since [1969 Patrick Troughton story] ‘The War Games’, and a knock on the TARDIS door…”

Moffat has called it “a beautiful poem of an episode” and says that Suranne Jones “will change the way you see Doctor Who forever forever – and that’s a hand-on-heart promise.”

Guest starring: Daniel Mays (the villainous DCI Jim Keats from the final series of Ashes To Ashes) and Emma Cunniffe (The Lakes) who play the parents of Harry, played by child actor Jamie Oram (info from The Doctor Who News Page).

Episode Five: “Rebel Flesh” (part one of a two-parter):

Steven Moffat describes this two-part story as a “thrilling and terrifying two-parter. The Doctor will face a dilemma the like of which he’s never seen before.”

Written by:
Directed by:
Other info: “Game-changing cliffhanger,” says Moffat.
Posted by Charles F Millhouse at 4:57 PM No comments:

Go to Sleep in the TARDIS 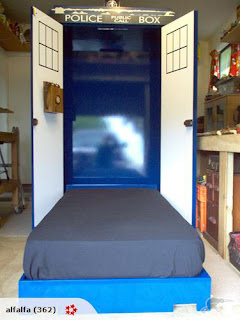 From blasr.com:
A New Zealand craftsman built this Doctor Who-inspired Murphy bed for his son, and now he's auctioning it off. If you want to dream in relative dimensions in space, then get to bidding.

The police light works, LEDs pulse, the telephone talks—TALKS!—and shines a Southern Cross on the ceiling. Granted, you've gotta ship it from New Zealand, but for the geek parent who needs the perfect bed for his geek kid—or the nerd Casanova who wants to make the Earth move—there's really no other option.

The lost opening to Craig Ferguson's Doctor Who show that was pulled by the producers at the last moment.
Enjoy.

Are You New To Doctor Who?